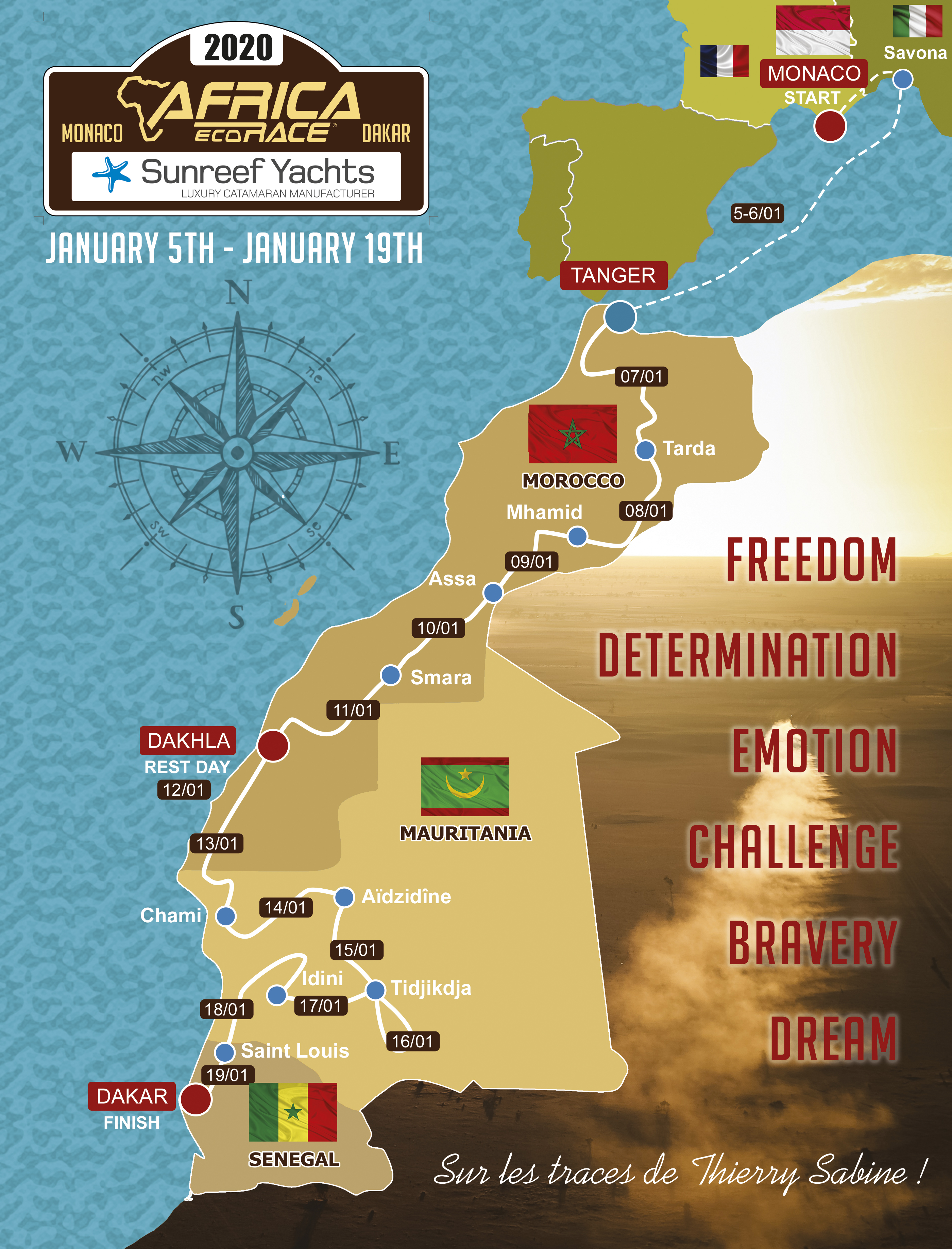 On several occasions on the AFRICA ECO RACE® 2020, the starts will be given from the bivouac. So it will not be too hot when the first motorcycles start at sunrise. Until the first erg that the competitors of the Africa Eco Race raced through for the first time in 2019, meaning a little more than 100 km, the special is unprecedented. A 100% Moroccan track with many wadis, sometimes very stony and gravelly track, sometimes rolling with some undulations. Therefore, pay attention to the tire pressure for the first few wheel treads in the sand. The 200 kilometers to Mhamid will be identical to last year with rather fast tracks, some more delicate areas and most of all, navigation in the middle of wide open spaces. A few small dune crossing will be the last difficulty of the day, about ten kilometers from the finish.

The first night on the bivouac in Tarda, halfway between Er-Rachidia and Goulimine was extremely cold as temperature went down to -3 degrees at sunrise. Needless to say that after a long day yesterday and a complicated night for the majority of the participants of the AFRICA ECO RACE, the faces were marked on the starting line directly installed at the bivouac. Regardless, this first real stage of 333km went perfectly went and most of the competitors should be back at bivouac by nightfall.

In the large moto category, Pal Anders ULLEVALSETER showed the competitors how good of a competition he is by winning this special stage, with 8’10’’ ahead of Lyndon POSKITT and 9’35’’ on Alessandro BOTTURI. Departing in 8th position, the Norwegian did not make any mistake on navigation, unlike the others. Indeed, Alessandro BOTTURI on his YAMAHA got caught up by Lyndon POSKITT on kilometre 40. The Italian opened the way several times but he lost the correct track, bringing the KTM and its British rider with him. Therefore, Lyndon also went on the wrong track. Later, the two leaders rode together until the finish line of this rather fast route. During this time, on his KTM, ULLEVALSETER was going full throttle and as in sport the best way to gain some time is not to loose any, the Norwegian ends up top of the general ranking  with 1’29’’ ahead of Botturi and 2’01’’ on OSKITT. Amongst the other performers of the day, the Italian Paolo LUCCI places his HUSQVARNA in 5th position just in front of the Norwegian Félix JENSEN, who has performed nicely since the beginning. Konrad DABROWSKI, young 18-year-old rider from Poland confirms his potential by ranking 7th, just before his “professor” Jacek CZACHOR, long term co-rider of his father Mark DABROWSKI.

The first moto +450 c3 is the KTM of the Italian Gabriele MINELLI finishing 16th and the winner of the Motul Xtreme Rider malle moto category is the excellent British rider Richard KAYE on his KTM. A last word on the Italian rider Nicola DUTTO, number 128 who has the particularity of participating in the AFRICA ECO RACE without having the use of his legs. This is possible for him thanks to two other riders, the Spanish Julian GARCIA VILLARRUBIA and the Italian Stefano BALDUSSI who hold his motorbike at departures, refuelling and at arrival. They are of course present to help him in case of any problem and putting back up in case of fall. For now, everything is going for the best for Nicola who, on his specially equipped KTM, is in 26th place on the temporary general ranking.

In the auto, SSV and truck category, ranked together in the scratch and in the general but then separately for a raking by category, the race is one of the most interesting and competitive yet. Indeed, depending on the configuration of the landscape, one of the other of these three vehicles can find an advantage.

Yesterday, the short special stage was perfect for the SSV. Today the long, fast, dusty, but also tough special stage going to Mhamid, were ideal for the trucks, especially the IVECO of Igor BOUWENS, Ulrich BOERBOOM and Frits DRIESMANS, at the scratch. A first very intense victory as the Belgiums left this morning in 49th position and raced up the ranking by passing 42 vehicles. A superb special stage which enables them to take the 2nd place in the temporary general ranking, just behind, and this is a first, the SCANIA of Miklos KOVACS, Lazlo ACS and Peter CZEGLEDI. After the departure, the Hungarians rapidly took the lead to do a perfect day. After their performance yesterday, they are therefore leaders of the 4 wheels with 22’24’’ ahead.

When it comes to the other trucks, who were also noticed today, we can note the 4th place of the Hungarian SCANIA of Karoly FAZEKAS, Albert Horn and Peter CSAKANY, but also the 6th place of the MAN of the Belgium Noël ESSERS, Marc Lauwers and Tijs VRANKEN in front of the Mercedes of Johan ELFRINK and Dirk SCHUTTEL.

The first auto in the general ranking arrived 3rd at 24’15’’. It is the Mercedes Tarek Buggy of Patrick and Lucas MARTIN. The father and son arrived third today and was ahead of approx. 12 minutes the Tarek of friends Yves and Jean FROMONT also 4th of the general at 27’32’’.

In the SSVXTREME RACE, with an 8th place in the special stage, Benoit FRETIN and Cédric DUPLE finish first, a little more than 4 minutes ahead of Alexandre DEBANNE and Patrick LARDEAU who raced without taking any risk. Loïc FREBOURG and Franck BOULAY complete the podium of the day 100% CAN AM by ranking 12th in the special stage.

As it’s the case in the moto category, the SSV category of the AFRICA ECO RACE includes two paraplegic drivers with the Italian Gianni Luca Tassi on his Yamaha, naviguated by Angelo MONTICO, and the Belgium Geoffroy NOEL DE BURLIN who is doing the race solo in a POLARIS. After this second day, all is going for the best for these exceptional drivers as Geoffrey is ranking 16th in general and Gianni in 22nd.

This Thursday 9th of January, the third stage of the AFRICA ECO RACE will be one of the longest in terms of special stages with 497km. What is awaiting, all types of landscapes we can find in Morocco and all the difficulties we would expect from such a stage. A day which will probably create serious gaps between competitors. 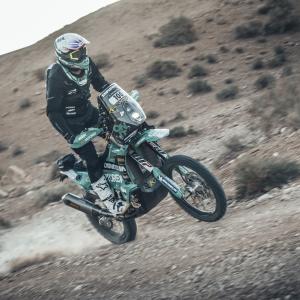 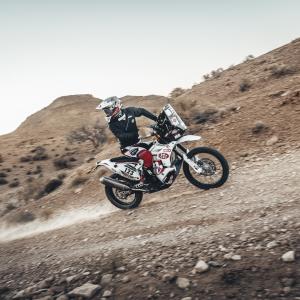 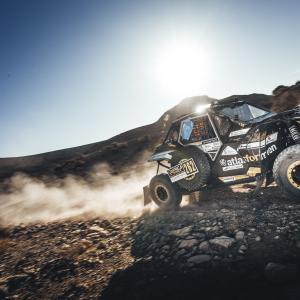 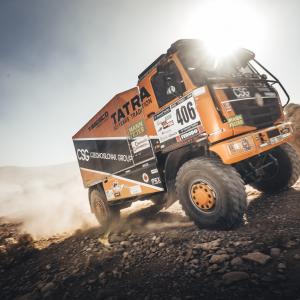 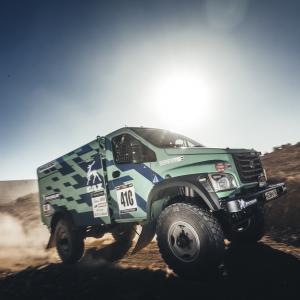 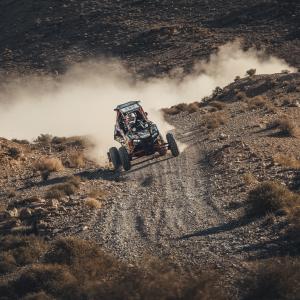