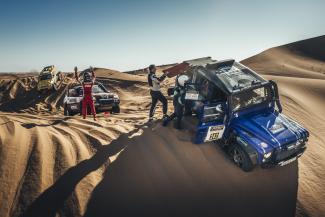 The third stage between Mahmid and Assa was expected extremely versatile in terms of landscapes and challenges. This special stage of nearly 500km, one of the longest of the 2020 Africa Eco Race, held its promise, especially near Erg Chegaga, first real dune cord of this 12th edition. Indeed, if the motorbikes, which left at sunrise, rode a solid enough sand, it was not the same for the autos, many of which will be arriving late today at the bivouac. 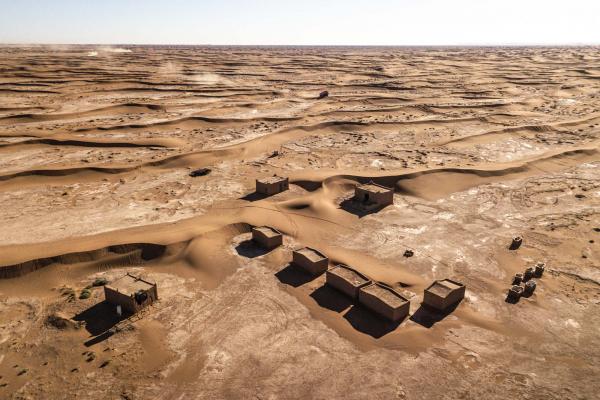 In the moto category, the faces were tired at the arrival outside the village of Assa and even for the most experienced of them, relief prevailed. Amongst the first leaving this morning, Pal Ander ULLEVALSETER could not keep ahead of Alessandro BOTTURI for long, and even if the Norwegian decided to go for a fast pace after the dunes, the KTM just couldn’t get away from the YAMAHA of the Italian. As a result, after the refueling, the two riders decided to collaborate and ride together to the finish line. BOTTURI logically ended up in front of ULLEVALSETER, who is still glad to only have 2’44 from last year’s winner in the general ranking. In third place, the Norwegian Felix JENSEN, with slightly damaged tires from the stones, has only 2’43’’behind his fellow patriot.

For his third participation to the AFRICA ECO RACE, Felix is showing real progress and the two first riders will have to keep an eye on him in the next days. Another young rider stood out today, Paolo LUCCI who ends up 4th place with less than 10 minutes from JENSEN. The fellow-citizen of late Fabrizio MEONI is fast, navigates well and scores the 5th place in the temporary general ranking, just behind Lyndon POSKITT, who played it safe on his KTM today after a small fall in the dunes.

The British adventurer ends up 6th of this special stage, 11’04’’ ahead of the Polish Jacek CZACHOR, keeping it regular. Special note for Norbert DUBOIS who celebrates his 60th today with a bang, by bringing his KTM from 43rd to 13th place on this special stage. The Parisian therefore ends up 16th in the general ranking and first of the French riders. On the 450cm3 +, the Mexican Juan Pablo GUILLEN also shows an amazing result by creeping up 47 places in the ranking. The KTM rider arrived today in first position in this category, dominated usually by Franco PICCO, 13th in the general ranking on his YAMAHA. The MOTUL XTREME RIDER category for the Malle Moto was dominated by Stephan SAVELKOULS, rider from the Netherlands. For now, the British Richard KAYE, 21st in the general ranking, is leader of the category. 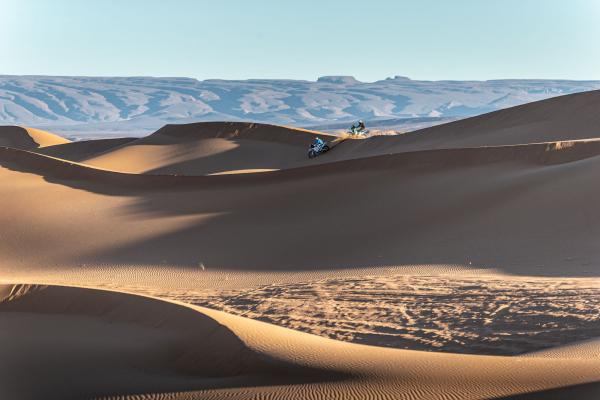 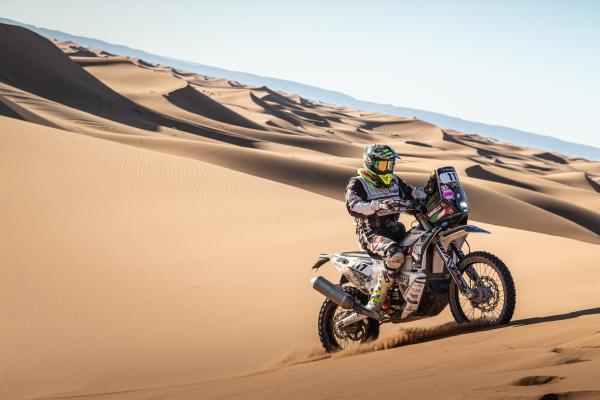 The stages follow one another but are very different in the AFRICA ECO RACE, as after the two first special stages dominated by the SSV, then the trucks, the autos ruled today. Yves and Jean FROMONT had a problem free day and even said upon arrival that they had a blast on all these type of landscapes. As a result, son and father are at the top of the ranking with their Tarek Buggy, followed by Patrick and Lucas MARTIN’s, who unfortunately got caught up twice in Erg Chegaga. The French team then pushed the gaz pedal to compensate the time lost in the dunes, but still ended up 4’20’’ behind their co-team. We have to scroll down to the 14th place to find the 3rd auto. It is indeed the Ford RAPTOR of Russian competitor Alexey TITOV and Dmitry PAVLOV, who are by the way 1st of the T2 category. 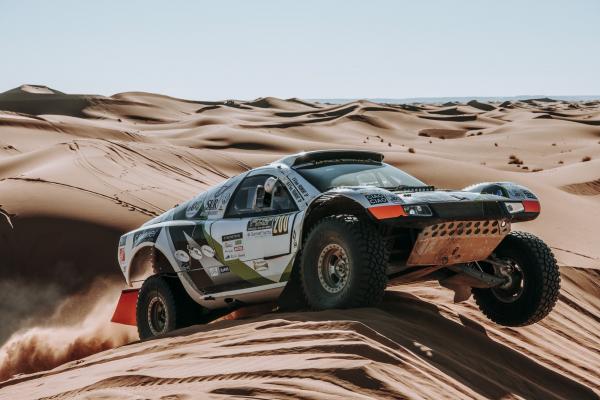 Once more the trucks were able to give on a show; Miklos KOVACS, Lazlo ACS and Peter CZEGLEDI end up third of the special stage. Putting aside their sport performance, the Hungarian showed important human values, close to the race’s ethics, by loosing their 1st place to FROMONT in the general ranking in order to help out of the dunes the IVECO of Igor BOUWENS, Ulrich BOERBOOM and Frits DRIESMANS. Without the help of the Hungarian team, the Belgians would have been stranded there for a while and yet, the two trucks are against each other in the category podium. Even though there game is far from over, this just shows you the spirit there is amongst these mastodons of the desert… a rare spirit! Once again, Noël ESSERS, Marc LAUWERS and Tijs VRANKEN finish 3rd in this special stage. In their MAN, the Belgian team also has same place in the general ranking behind BOUWENS and KOVACS. 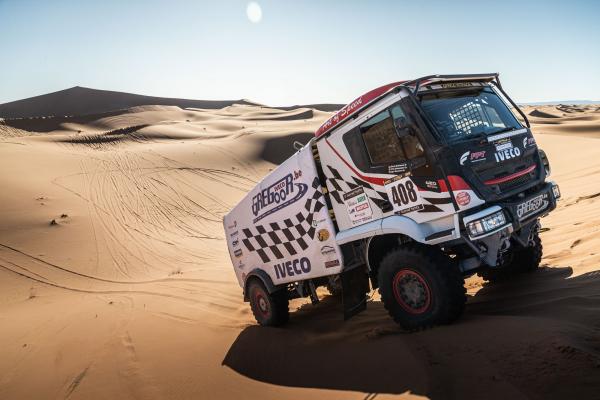 The SSV also made it out well of this long and difficult special stage. Loïc FREBOURG and Franck BOULAY place their CAN AM in 6th position at 52’37’’ of the best time of the day. In this category SSV XTREME RACE, the French are ahead of their fellow patriots Alexandre DEBANNE and Patrick LARDEAU of about ten minutes. Anyways, the latter are first in their category and score a solid 5th place in the general ranking for 4 wheel vehicles, just in front of FREBOURG and BOULAY by 2’55’’. We should also congratulate on this 3rd special stage, the very good performance of the solo pilot in his SSV, Geoffroy NOEL DE BURLIN who, onboard his POLARIS, takes 10th at the scratch. Therefore, the Belgian paraplegic driver, is ranked 11th in the general. 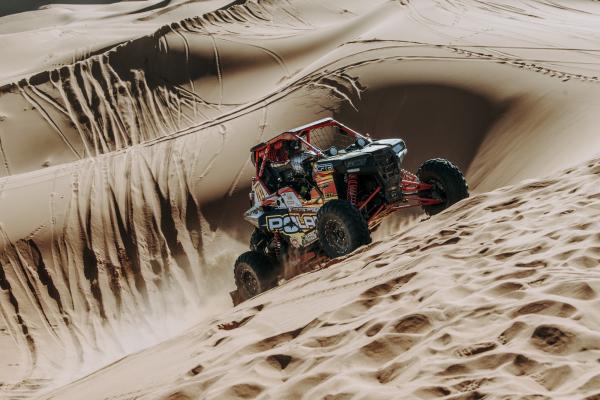 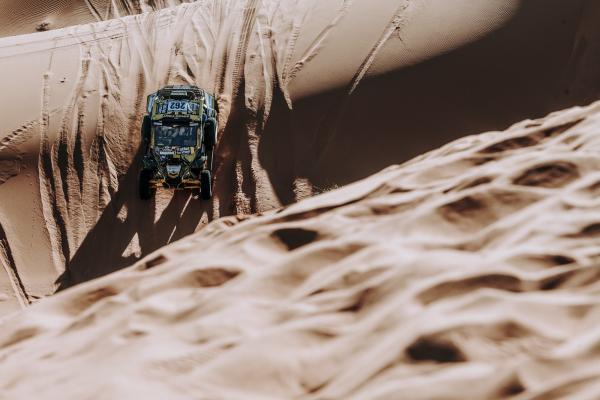 We are only at the beginning of the rally. A lot can still happen. Today, Lyndon struggled in the dunes. Sometimes, I wanted to push more but I know that on a stage this long, anything can happen. It is therefore very important to arrive at the bivouac and still be fit to compete the next day.

Today, I tried to push hard from the beginning. At kilometer 50, I caught up on Pal Anders. Then, I had a road-book problem. It wasn’t turning properly. I therefore arrived at refueling with Pal. Then from km 250, I tried to give it another push, but we decided to both keep a good rhythm. But Pal is a Viking. He is also very good. And in the end, it’s good because we were able to take more distance from the others. It was very important for me to do this because tomorrow, they will be leaving behind me and we’ll see what that will be like.

We are very happy because we navigated very well. We drove nicely and had no mechanical problem. We passed the dunes easily. After the sand, we came across a stony area. It was tiring and the special stage was very long. We are happy to be at the start and fulfilled our objective which was no mechanical issue and no getting lost. And on top of that, we are well ranked. We are tired, but happy.

It was a nice special stage as we like them, with the Erg of Chegaga which this year was tough. We passed the trucks at the top of the dunes. We did not stay stuck. After that, we did good, especially at navigation which was quite hard as we were following the motorbikes. Jean really did good to orient us. I am happy because we make an excellent tandem both of us. I played my role in the dunes. And after, he took care of the navigation. It was perfect. 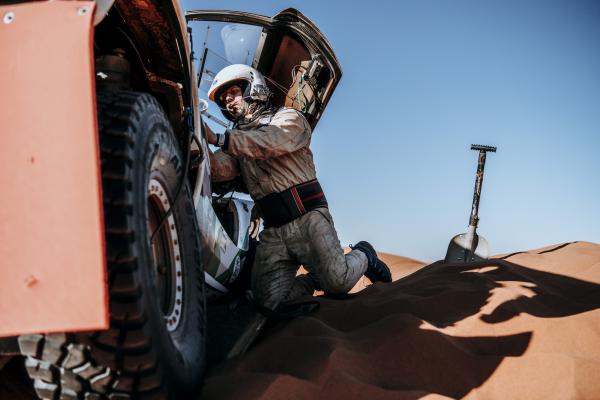