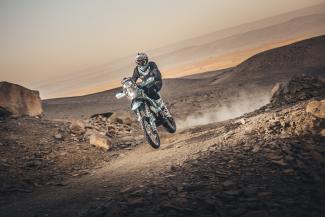 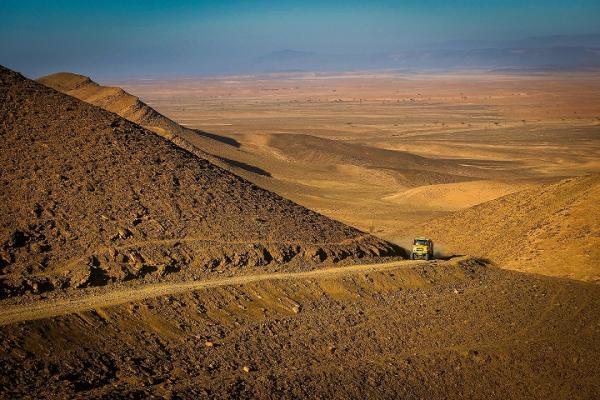 It is an entirely new special stage on the AFRICA ECO RACE ® that awaited the competitors of this 4th stage full south towards Smara. As expected, navigation was the key to success in this selective sector of 385 km, both by car and motorbike. Apart from that and a specific track fatal to many tyres, there was no major difficulty and the last competitors should not get out of the special too late. A good thing after the long 3rd stage where some have already burned the joker that allows him to give up once on a special before being disqualified. 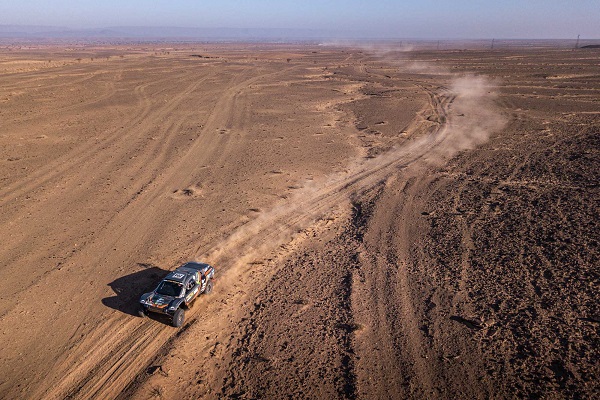 The least we can say is that Lyndon POSKITT had a smile on arrival. And for good reason since the British driver, who started in 5th position on his KTM, won his first stage on a big all-terrain rally. A victory made possible by a navigational error 40 km from the finish of Pal Anders ULLEVALSETER and Alessandro BOTTURI. The first two were coming back on the right track when POSKITT saw them. The Englishman then only had to follow the YAMAHA and the KTM until the finish to pocket the scratch. The other who made the most from the time lost by the leaders of the Moto category is the young Konrad DABROWSKI since he signs the 2nd time. The young Polish learns his job as a Rally driver every day and at 18, he is quietly making a name for himself in the discipline. After this complicated day for Alessandro BOTTURI, faced with problems with navigation console instruments on his YAMAHA, the Italian retains the head of the general. However, it is now only 9 seconds ahead of ULLEVALSETER's KTM. It was also a difficult step for Felix JENSEN, who had suffered a fall. The Norwegian still managed to get back to the finish just over 48 minutes after the first. However, the KTM driver may not return to racing tomorrow due to a significant shoulder injury requiring further medical examinations. On the medical front, note a nice ankle sprain for pilot Julie VANNEKEN. The Frenchwoman finished the special and she should continue the adventure. 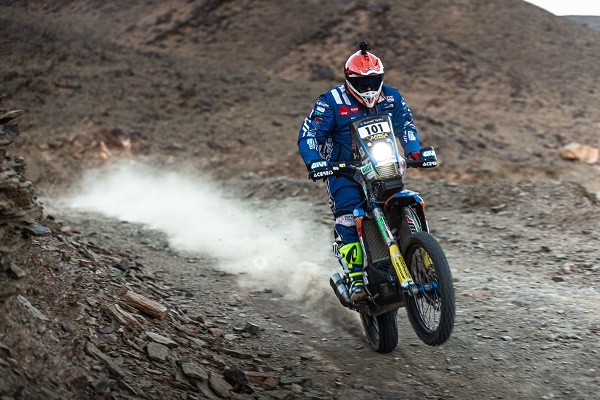 On four wheels, a truck won again today. It is the IVECO of Belgians Igor BOUWENS, Ulrich BOERBOOM and Frits DRIESMANS, who scored a problem free special stage. Without its two punctures, the SCANIA of Hungarians Miklos KOVACS, Laszlo ACS and Peter CZEGLEDI, who came 3rd at 16'43'', would certainly have won and even regained the general's lead. But the harsh law of the race decided otherwise. By placing their MERCEDES in 5th position, the Dutch Johan ELFRINK and Dirk SCHUTTEL complete the podium of the day in the truck category. Overall, KOVACS still leads the way ahead of BOUWENS, while the other SCANIA of Hungarians Karoly FAZEKAS, Albert HORN and Peter CSAKANY is third, 2 hours from the first two. 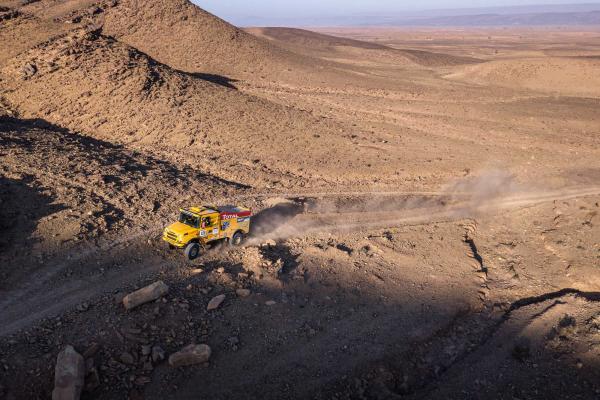 In the car, Yves and Jean FROMONT, delayed by a puncture with a technical problem to get the spare wheel out, pocket the 2nd time scratch at 15'54'' but the first time in the car. The French are ahead of Patrick and Lucas MARTIN's other Buggy Tarek. You have to go down to 9th place to find the third car. This is the NISSAN of Stefano ROSSI and Alberto MARCON who are doing pretty well after a late-night mechanical session completed a few minutes before the start of the stage. A nice revenge after the break of their gearbox yesterday. It was also a great day for Russians Alexey TITOV and Dmitry PAVLOV, author of the 10th time with their FORD Raptor. In the provisional car classification, the FROMONT family and the MARTIN family are separated by only a dozen minutes while Alexey TITOV is currently on the podium with his T2 vehicle. 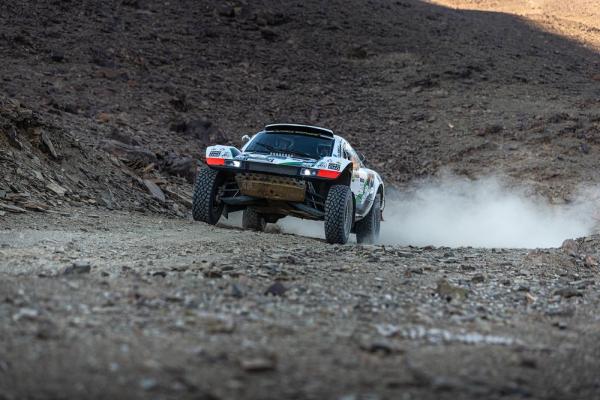 In SSV, the days follow each other and do not resemble in the category SSV XTREME RACE. Indeed, the leaders Alexandre DEBANNE and Patrick LARDEAU tanked three times. The problem is that they only had two spare wheels on their CAN AM. The French lost almost 2 hours and the first place of the general now occupied by Benoit FRETIN and Cédric DUPLÉ, authors of the 6th time of the stage. The 2nd SSV to cross the finish line is the CAN AM of the French Patrice ETIENNE and Jean-Pierre SAINT MARTIN, credited with the 18th time. Senegal's Kamil RAHAL and Thierry SANCHEZ, also on CAN AM X3, finished third and in the top 20. In the provisional general, behind FRETIN, Loïc FREBOURG and Franck BOULAY are now ahead of DEBANNE. 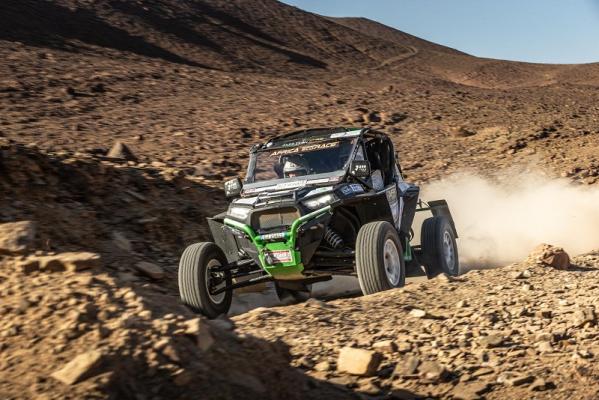 Tomorrow, Saturday, January 11, the AFRICA ECO RACE caravan ® will head to Dakhla for a well-deserved rest day on Sunday. Before that, the competitors will have to work on the 473 km special of a rather rolling course. So it is navigation again that should make the difference.

It was a very nice stage in terms of driving. There was also a lot of navigation which was really not easy. In the end, we did very well. We achieve the perfect day with the victory at the end. Everything is going well after those first four days.

I was following Pal and Lyndon. There was a lot of dust. I hit a small embankment and made a huge gliding flight. So I landed on both shoulders. I don't think it's broken but I'm in a lot of pain and I don't know if I'll be able to leave tomorrow. I'm extremely disappointed because I think I was really in the game this year to play a podium.

The special was complicated in navigation. I got lost looking for a waypoint and I left about ten minutes. One moment, I even thought I had lost everything. I managed to find the right track and then I came across BOTURRI and ULLEVALSETER, also lost. It was a tough day on these stony tracks but it's finally where I saved the most time. I won my first stage of a big rally and I'm delighted.

40 years ago, I was making my first start at the Trocadéro in Paris. I was 22. To celebrate, I wanted to do it again this year and arrive in Dakar. I chose the AFRICA 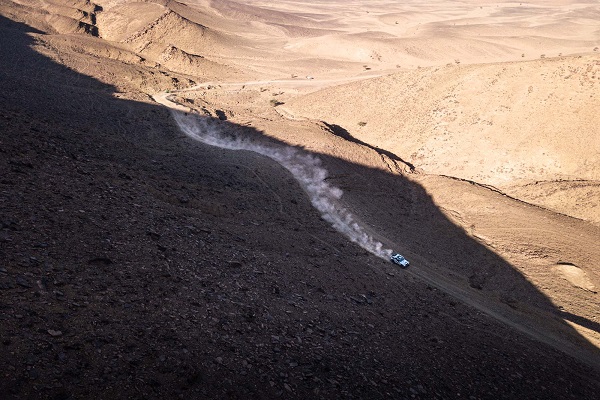