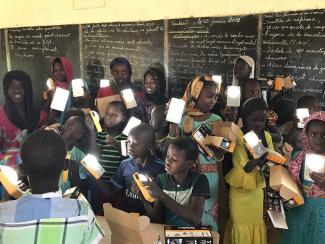 850 solar lamps distributed to Mauritanian and Senegalese schoolchildren along the course of the Africa Eco Race rally.

On the African continent more than 600 million people still do not have access to electricity, a real handicap in terms of economic development and access to basic services, such as education or health.

In the absence of access to electricity, the use of oil lamps is widespread in sub-Saharan Africa. The use of kerosene, in addition to being particularly expensive - representing up to a third of a family's daily budget, is also a significant source of greenhouse gases contributing to climate change.

The gases (carbon monoxide, nitric oxides, sulfur dioxide, etc.) and the fine particles emitted by the kerosene lamps are very harmful. Nearly 4 million deaths per year are attributed to the pollution from the use of oil lamps.  This makes it the leading cause of death in Africa, more than tuberculosis, malaria, and HIV / AIDS combined.  The use of kerosene is also at the origin of many household incidents. Aside from burns, ingestion of kerosene is the leading cause of death from poisoning in children.

Experience shows that when a household has access to a clean and sustainable energy source, children are the primary beneficiaries, in terms of health, but also in terms of education.

AMADE Mondiale has initiated the challenge "The Energy of Hope" to promote access to clean energy for Sahelian students through the distribution of solar lamps in partner schools in non-electrified areas.

AMADE Mondiale strategically joined forces with Lagazel, the first company producing solar lamps on the African continent. Lagazel solar lamps, made of metal, are also known for their robustness and are the only ones to have batteries that can be replaced and recycled.

Each lamp makes it possible, by replacing a kerosene lamp, to reduce greenhouse gas emissions by 200 kg per year and the beneficiary child will have the capacity to study an average of 4 hours more per day.

An initiative supported by the organization of the AFRICA ECO RACE Rally, the Prince Albert II of Monaco Foundation, and the insurance brokerage group ASCOMA Jutheau & Husson

AFRICA ECO RACE as part of its eco responsible and solidarity approach wished to commit itself alongside AMADE Mondiale in favour of this initiative by allowing the acquisition of more than 400 solar lamps. AFRICA ECO RACE has also mobilized to organize, in collaboration with AMADE Mondiale, the distribution of solar lamps at points along the course of the rally in Mauritania and Senegal.

This initiative also benefited from the support of leading Monegasque partners sharing this eco-responsible approach as well as AMADE's global commitment to children.

The Prince Albert II of Monaco Foundation (www.fpa2.org), a major player in the field of environmental protection and the insurance brokerage group ASCOMA Jutheau and Husson (www.ascoma.com), benefiting from a solid presence in Africa, wanted to take up the challenge of offering access to energy and education of Sahelian schoolchildren alongside AMADE Mondiale, as official partners of the initiative. Each of these partners, having taken charge of the acquisition and distribution of 200 additional lamps, ammounted to a total of 850 solar lamps which were distributed, representing an investment of € 20,000.

The Monegasque Electricity and Gas Company (SMEG) (www.smeg.mc) and the restaurant Stars'N'Bars (www.starsnbars.com) have also supported the organization of this initiative, which aligns with their respective commitments to the environment.

The rural schools of Chinguetti, Ouadane and Saint-Louis, beneficiaries of the 1st edition of the challenge "The Energy of Hope".

For this first edition, the beneficiary schools were rural schools located around the mythical city of Chinguetti in Mauritania as well as the city of Saint-Louis in Senegal, two sites crossed by the AFRICA ECO RACE rally.

The beneficiary schools were identified in collaboration between AMADE Mondiale and the authorities of local partner associations.

In Chinguetti and Ouadane, 400 lamps were distributed to 6 primary and nursery schools, and 350 lamps in 6 schools in the Saint Louis region. At the arrival of the rally at Lac Rose, 100 lamps were also given to the children of a primaru school in the area of Fatik.

The priority classes targeted for distributions in each beneficiary school are the CM2 (AGE 12) classes whose students will have to pass an exam at the end of the year. AMADE Mondiale will keep a close eye on the results recorded in terms of academic success within these beneficiary classes.