Transfer to the bivouac : 2 km

This stage will have the longest leg ever since the beginning of the AFRICA ECO RACE®. The competitors will once again drive close to the Oued Draa for a few kilometers while driving on a part sandy part rocky track where the navigators will have to be very concentrated. After M’seied a wide track will gradually bring the rally towards the southern Moroccan desert. The scenery will then drastically change. The vehicles will get onto some more fast tracks in the heart of massive plains with no much landscape and thus not many visual point to navigate with. The navigators will have a hard time in this area. We have put in place many beacons in order to help you through, but it remains a very complicated section with many possibilities to go in the wrong direction. Some passage into valleys will fill this section of the course. As you get closer to the Oued Hamra things will get more complicated. Totally flooded over a year ago, all the track have disappeared, it has therefore become an off road section where you will need to search for the exit. In order to exit this valley you will come across a dune crossing before finishing the stage on a very fast wide track all the way to the bivouac in Fort Chacal. This leg is one of the big ones for this year’s rally.

The fourth day in Morocco is a first with the longest leg of the Africa Eco Race since its creation. 497 kilometers with fast tracks and some sand. It's been a big fight in cars between Vasilyev and Serradori, in motorbikes Paolo Ceci settles his leadership.

The west rush
For this big premiere, the competitors drove close to the Oued Draa for a few kilometers on a sandy part before the rocks where the navigators had to be very focused. Ater M'seied a wide track brought them to the southern Moroccan desert. The vehicles got into some more fast tracks in the heart of massive plains with no much landscape and thus not many visual point to navigate with. It is a very complicated section with many possibilities to go in the wrong direction. As they got closer to the Oued Hamra things went harder. Totally flooded a year ago, all the tracks have disappeared, it has therefore become an off road section not easy to escape. Finally, they had to come across a dune before finishing the stage on e very fast wide track all the way to the bivouac in Fort Chacal.

Vasilyev as boss, Ullevalseter out
The long awaited auto duel of this edition is launched. The defending crew Vladimir Vasilyev - Konstantin Zhiltsov (RUS / MINI) and Mathieu Serradori - Fabian Lurquin (FRA / MCM) have engaged in an intense battle full of twists and turns. Leading, the French had to slow down in the last part of the leg because of a power steering problem. The Russians were able to take advantage but three punctures made them waste time and the two cars passed each other before Vasilyev won the final sprint 3'21" before Serradori. Pascal Thomasse and Pascal Larroque (FRA / OPTIMUS) confirm their 3rd place overall by finishing just in front of their partners at MD Rally Sport Guillaume Gomez and François Borsotto (FRA / OPTIMUS) who managed to finish the leg without mechanical problems.

In the motorbikes, very difficult day for the double winner Pal Anders Ullevalseter (NOR / KTM). His chances of winning this year are compromised because of a fuel tank problem that forced him to abandon the leg after 100 kilometers of racing. Paolo Ceci takes the opportunity to consolidate his leading position by winning the stage of the day 8'52" ahead of Luis Oliveira (POR / YAMAHA). A good operation for the Portuguese who takes the 2nd place in the overall ranking.

They said :
Vladimir VASILYEV: "It was a great leg but Jean-Louis Schlesser did not spare us the punctures ... After three tires dead we did not have a spare wheel anymore! It was difficult especially at the end in navigation, we still have two minutes ahead of Serradori, it was a great fight today, we did not stop crossing each other, it was great. "

Mathieu SERRADORI: "We opened the track with a good navigation before engaging in a great battle with the Russians, it was very intense! After 414 kilometers of racing I had no more power steering, it was very difficult to turn the wheels in the dunes but we wanted to finish and had to slow down. Finally we are doing very well thanks to Vasilyev's misadventures. Now we will have to repair and come back tomorrow."

Gerard DE ROOY: "It was a long day but a very nice leg with a lot of navigation, I got lost once, the truck was fine, I drove slowly knowing that I did not have anyone behind me. I preferred to be careful. "

Paolo CECI: "It was a difficult leg with the navigation but I did not make any mistake, I drove with Oliveira up to 30 kilometers from the finish, physically I feel good but I'm disappointed because I could not fight with Ullevalseter. "

Luis OLIVEIRA: "I'm still learning, it was a good day for me, I passed Ceci after 40 kilometers of racing and I opened the track for a while then I got lost and ended up finding Paolo's tracks until the finish. "

*Provisional results, subject to changes in ranking after jury deliberation 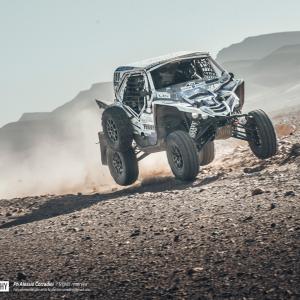 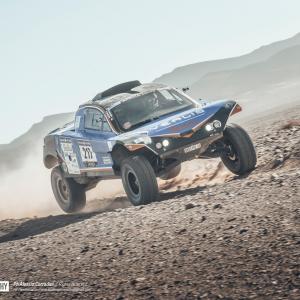 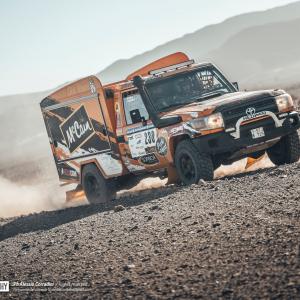 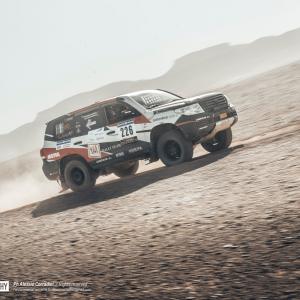 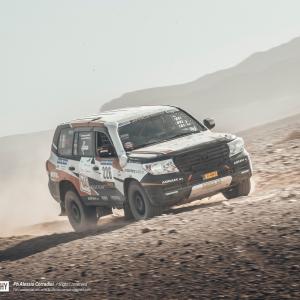 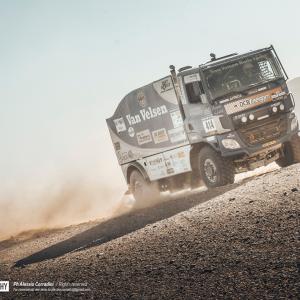