For the first time of this 10th anniversary course, the start will be given at the bivouac. This will give the competitors some extra time to sleep and allow the assistance crews to see the race cars start full throttle. The leg will begin with a nice fast track at the foot of a very special mountain range and then the track will have cairns to indicate the way to Assa, this will therefore make navigation very easy. Throughout the leg, the competitors will pass many military outposts but also many dried lakes. It will be near the end of the stage where the navigation gets a bit more complicated as they head back toward the Oued Draa. The finish will be set up on the outskirts of the town of Assa, which the AFRICA ECO RACE® has been passing regularly for the past 9 years.

The 10th edition of the Africa Eco Race caravan is still going south in Morocco. On this January 4th 2018 the leg starts directly at the bivouac and 400 kilometers later they reach Assa where awaits them a 21 kilometers to the bivouac. Speed was the order of the day to the delight of Mathieu Serradori in the cars and in the motorcycles it was a great first for Luis Oliveira.

A fast track
After a short night for many competitors who had a very tough day yesterday, it felt nice to have more time this morning to get prepared for the leg starting just outside the bivouac. The leg started with a nice fast track at the foot of the Anti-Atlas mountains. Later the cairns helped them follow the track so they can speed during a long part of the leg. Throughout the day, the competitors passed many military outposts but also many dried lakes. It was near the end of the stage where the navigation got a bit more complicated as they headed back toward the Oued Draa. The finish was set up on the outskirts of the town of Assa.

Serradori , the surprise Oliveira
Mathieu Serradori and Fabian Luquin's car was the fastest on this particularly tough leg. Starting two minutes after leaders Vladimir Vasilyev and Konstantin Zhiltsov (RUS / MINI), the SRT crew crossed the finish line a few seconds behind their main competitors. A tight duel between the two cars that remained in contact a good part of the race. The Russians were still happy to congratulate them just after a tire puncture on the finish line. The result of 400 kilometers of fast stony tracks but tough on the tires. That's what caused some problems to Pascal Thomasse and Pascal Larroque (OPTIMUS) who lost time to change a wheel and finished 4th. 3rd place went to Remy Vauthier and Jean Brucy (SUI / OPTIMUS).
The first truck of the day also had to replace a wheel just behind the finish line. Gerard De Rooy (NL / IVECO) finished 5th, frustrated for not being faster but gaining two places overall.

In motorbikes, after 4h52'16" of race, Luis Oliveira (POR / YAMAHA) arrived second of the stage. At 25, he came with his father, who acts as a mechanic for his first rally-raid and is already on his way with a 3rd place overall, he finished 26" behind of Paolo Ceci (ITA / KTM) who wan the stage and takes the lead 2'26" in front of Pål Anders Ullevalseter (NOR / KTM).

Poor Elisabete Jacinto (POR / MAN) only female truck driver is forced to give up. The regular actress in the Africa Eco Race broke her differential and does not have the spare part in her assistance truck. It is very sad that she leaves the Africa Eco Race before joining Mauritania, as last year when her engine broke during the 2nd stage.

They said :
Mathieu SERRADORI: "We are happy, it was a great leg, Fabian navigated very well which allowed us to catch up with Vasilyev, there was a good fight. We will open tomorrow, I have confidence in my co-pilot so that's not a problem. "

Vladimir VASILYEV: "Today it was particularly tricky because of pebbles, it was like being on Mars, we like our rivalry with Serradori, we are fighting on the track but we are friends."

Rémy VAUTHIER: "We drove fast but it was not a good race, the Africa Eco Race is not really easy, besides I have the flu but we manage to finish 3rd today, I'm happy with it."

Pascal THOMASSE: "These stony tracks were not fun... and as we did not change our tires yesterday, I wanted to be careful but 50 kilometers from the finish we had problems with one wheel. I prefer the 100-kilometer stages at my age! "

Gérard DE ROOY: "It was a great leg, very long, we had a slow puncture a little before the finish but we were able to drive and continue to the end, slowing down. It will be difficult to top the overall ranking but I keep the podium in mind. "

Luis OLIVEIRA: "It was a quick and difficult leg for me, I'm learning every day, it means a lot to me to have passed the two best drivers, I made a mistake, Paolo came back faster and I followed him to the finish. "

Paolo CECI: "For 200 kilometers until the refueling it was very monotonous, then there was a lot of navigation, it was easy to make mistakes. Today it was flat and stony, I preferred the dunes yesterday. The motorbike is doing very well and I am confident. "

Pål Anders ULLEVALSETER: "There were a lot of stones, it was very hard physically, I got lost twice but I managed to get back into the race to keep in touch with Paolo. I hope to feel better and better day after day. " 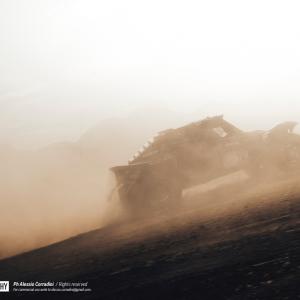 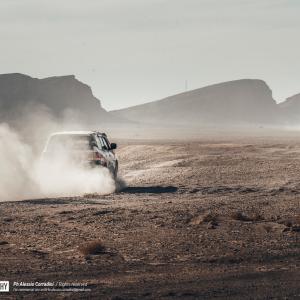 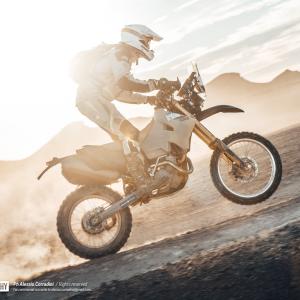 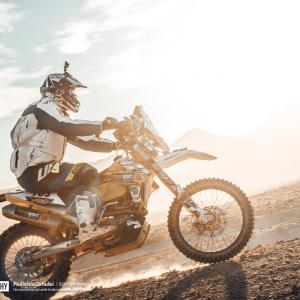 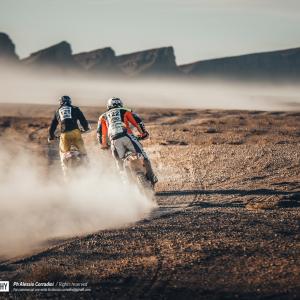 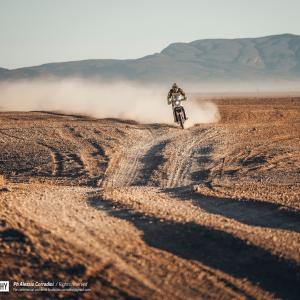