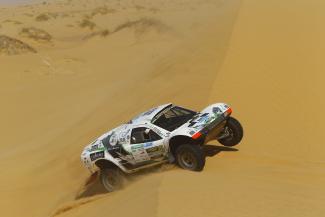 After the hectic day yesterday due to the accident of both OPTIMUS buggies on the arrival of the special stage, the atmosphere was back to normal and focused on the race leaving from the CHAMI bivouac this morning. Luckily, because this stage of 507 kilometers towards Amodjar is known to be extremely challenging. The clerks of the course of the AFRICA ECO RACE were not wrong and some competitors will be arriving late at the Amodjar bivouac.

SIMILAR STAGES IN THE MOTORBIKE CATEGORY
Days go by and look the same for the top two of the moto race as Pal Anders ULLEVALSETER and Alessandro BOTTURI. Meaning ULLEVALSETER left 2 minutes ahead and BOTTURI caught up with him. Both men then rode together. Nevertheless, after the fuel checkpoint, the Norwegian pulled out the big guns to try and loose the Italian. Even though he resisted, and both men arrived together at the end of the stage.
Same scenario for Felix JENSEN who tried to catch up with then loose Simone AGAZZI. There again, the Italian resisted and stayed along the Norwegian pilot, close enough to fall on him when his KTM went sideways in the dunes. Therefore, the time difference is minimal as AGAZZI finishes 5’15’’ from BOTTURI and JENSEN at 7’34’’. Also, to be noticed, the solid performance of the driver from Guatemala Francisco ARREDONDO, ranked 5th today, as well as Guillaume VIDAL, 6th of the today and 1st French. On the other hand, two favorites of the race will be quitting today, as Stéphane HAMARD, 8th in the general ranking yesterday, fell off at kilometer 41. A fall which wasn’t grave but he was rushed to the hospital in Nouakchott for some tests. The second is Paolo CAPRIONI, 11th in the general ranking and leader of the 700 category. The Italian broke the engine of his KTM at kilometer 380 of the special stage. Same as a few moto drivers in difficulty today, he will be brought back later to the bivouac with the balai truck, and this will complicate his start tomorrow, if ever his engine is repaired.

NEWCOMER IN THE AUTO CATEGORY WITH FROMONT
When looking at the top 10 of the auto category today, we can say that this 2nd Mauritanian special stage of the AFRICA ECO RACE has completely changed the scene of the ranking up to today, as 6 new teams make their way into it. Starting with the winner, Yves FROMONT and Paul VIDAL who lead with their Tarek, even with a small incident and 20 minutes lost. The French get first place and are ahead of the OPTIMUS of the compatriots Philippe GOSSELIN and David BONON by 4’15’’, as well as Jean-Pierre STRUGO & François BORSOTTO by 7’01’’. From the 4th to the 7th position, we only have newcomers on SSV CAN AM X3 with Bruno FRETIN & Willy CHARBONNIER, Jean Hugues MONEYRON & Thierry BERRAZ, Rudy ROQUESALANE & Vincent FERRY. Jean-Noël & Rabha JULIEN place their OPTIMUS in 7th position in front of the CAN AM X3 of Benoit FRETIN and Anthony PICHARD when François and Stéphane COUSIN continue to lead the 4x4 category with a 9th place in their NISSAN Pick-Up. Patrick Martin & Didier BIGOT end the list with a 10th place at 35’37’’. An extremely open race which we could expect with the versatility of vehicles and competitors of this 11th edition of the AFRICA ECO RACE.
In the general ranking, the OPTIMUS of Jean Pierre STRUGO was set in the lead ahead of the two TAREK’s of Yves FROMONT and Patrick MARTIN, separated by only fifteen minutes approximately. When we know the tracks awaiting them to leave Mauritania, we know the race is far from being set in stone.

FIRST VICTORY FOR THE ESSERS TRUCK​​​​​​​
Since the beginning of the AFRICA ECO RACE 2019, Nöel ESSERS, Marc LAUWERS & Johan COONINX show regular performance everyday and that is the reason of their 2nd place in the truck category. This Belgium team once again showed their strength and won the special stage, a bit more than 10 minutes ahead of Elisabete JACINTO, Jose MARQUES & Marco COCHINHO, the leaders of the general ranking of the trucks, even though they helped Patrick MARTIN out of his slight incident. A great performance for this 70s year old, boss of one of the biggest transport company in Europe. The podium of the day is completed by Tomas TOMECEK who has solid merit by being alone in his TATRA. In the general, Elisabete JACINTO is still leader in front of Nöel ESSERS and the Holland team of Aad VAN VELSEN, Marco SIEMONS & Harry OOSTING in their GINAF.
Tomorrow, Thursday 10th of January, the second loop will be awaiting the competitors with a departure and arrival in Chinguetti and a 375 kilometer special stage to race. The most beautiful of the AFRICA ECO RACE stages with over 100 km of crossing of the most magnificent dunes of Mauritania.