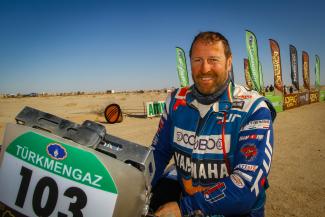 The last stage of the AFRICA ECO RACE between Akjoujt in Mauritania and Saint Louis in Senegal went perfectly well. Starting with the special stage of 218 kilometers which left from the bivouac to join Fimlit, a village situated 80 kilometers from Nouakchott. This stage was without difficulty for the leaders of the ranking. It will therefore be a party tonight at the Saint Louis Bivouac where some competitors will be joined by family and friends.

After the emotion of Alessandro BOTTURI dedicating his victory to his mother who recently passed away, the winner and Pal Anders ULLEVALSETER, second place, fell in each other’s arms. A proof of fraternity and respect between these two moto champions, true heroes of the desert. A bit less than two hours before, the two competitors, only separated by 7 minutes since the first day, left the starting line with a solid motivation not to give up now… Therefore, Pal Anders pulled out the big guns with his KTM and forced Alessandro to go that extra mile to keep up with his YAMAHA. In the end, Pal Anders ULLVALSETER wins this last special stage, 2’14’’ ahead of Alessandro BOTTURI but still looses the rally for 5 small minutes, after riding 4 000 km of chrono stages. The Norwegian can also be happy of being leader in Veteran. Just behind them, Simone AGAZZI took no risk to have a guaranteed spot on the podium, as Felix JENSEN did but finished 4th place as in 2018, just in front of his Team ULLEVALSETER partner Francisco ARREDONDO. Patrice CARILLON ends up in 6th place. He is the number one French driver as well as the leader of the Malle Moto, these competitors who do their assistance themselves with equipment transported by our organisation. Special congratulations to Jan ZATKO who, at 62 years old, finishes 9th of the rally and 1st in the over 450 cm3, as well as Norbert DUBOIS who enters the top 5 of the special stage and end up with a satisfying result at the end of the rally.  To finish, the French Julie VANNEKEN succeeded in finishing this AFRICA ECO RACE without missing any stage and ends in 30th position just in front of Paolo CAPRIONI, only driver of the 700 cm3 category that was still in the competition.

The last one for Jean-Noël and Rabha JULIEN

With only 200 km of special stage, not much could change for the two-first places of the auto/truck general ranking as Jean-Pierre STRUGO and François BORSOTTO has 1.30 hours ahead of David GERARD and Pascal DELACOUR, themselves 25 minutes ahead of the third place. In fact, it was the third space on the podium that was uncertain as Yves FROMONT and Jean-Noël JULIEN were only 1’46’’ from each other. It was not an option for the latter and Rabha, his wife co-pilot, to not be on the podium. The OPTIMUS N°208 team therefore begin with only one focus, WIN and it worked apparently as they did the best time of the day. “Pénélope” and “Jolicoeur”, their nickname in the “Fous du Volant” team, also were ahead of “Roc” and Gravillon” aka David GERARD and Pascal DELACOUR, their team partners, by 4’07’’, as well as Yves FROMONT and Paul VIDZL by 6’23’’. It is therefore the JULIEN couple who finish in 3rd position of this 2019 edition of the AFRICA ECO RACE. In the other categories, Rudy ROQUESALANE and Vincent FERRY lead the SSV category by finishing 9th of the overall ranking auto/truck in their CAN AM X3. At the 11th place, François and Stéphane COUSIN win the title in the 4x4 category in their NISSAN Navara. Alexey TITOV and Andrey RUSOV succeed in the T2 category in their impressive FORD RAPTOR. In that category, the Russians are ahead of the rally raid legend Kenjiro SHINOZUKA, with co-pilot Cathy DEROUSSEAUX in their ISUZU. Tristan COUEDEL and Edouard SINEUX lead in the “Double rigid train” in their LAND ROVER.

If Tomas TOMECEK, triple champion of the AFRICA ECO RACE, had not broken his clutch on his TATRA, he would have probably won this 11th edition. But as we say: what if… Anyway, the Czech driver finishes the race on a positive note by arriving in 6th place on the truck scratch. But the winner is without doubt, Elisabete JACINTO who, with Jose MARQUES and Marco COCHINHO who this morning again, got second best time in the truck category. Especially, they won the race in their category with an impressive 5th place in the auto/truck ranking. An incredible result, added to the many special stage won during the race which are the result of huge team work, as they had been chasing the trophy for 10 years. The victorious MAN was ahead of another truck of the German brand. The one of Noël ESSERS, Marc LAUWERS and Johan COONINX who rank 7th overall and showed great stability during the entire rally. The Netherland team composed of Johan ELFRINK and Dirk SCHUTTEL complete the podium of these desert beasts in their stunning MERCEDES.

Tomorrow, after a night under the starry skies of Senegal in the Saint Louis bivouac, the competitors will join the breathtaking Lac Rose with a morning liaison of over 200 kilometers. Last effort before driving up that podium will be to drive a last special stage of 22 km around the Lac. After that, it will be celebrations for all competitors !