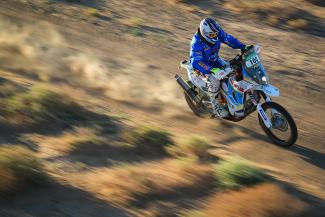 AFRICA ECO RACE 2019 : TOWARDS THE SOUTH

Temperature was 23 degrees on the arrival of the Fort Chacal bivouac, a locality situated approximately 30 kilometers from Laayoune. Ideal racing conditions for this 4th stage, as it has been since the beginning of the 2019 AFRICA ECO RACE. Also, since the first stage of this 11th edition, navigation is at the center of the racing and regardless of the precise road-book appreciate by competitors, it has been a tough challenge for most of them.

BOTTURI: 2 / ULLEVALSETER: 2
After the victory of Pal Anders ULLEVALSETER today in front of Alessandro BOTTURI, it is an equal score of successful special stages between the Norwegian on his KTM and the Italian on his Yamaha. A perfect equality in the ranking, but it is not these points that will count, but the chronometer and Alessandro BOTTURI is still leader with 5’08’’ in front of ULLEVALSETER.Which is not much when you know how much is left to Dakar. Following these two drivers who are well ahead, the competition is on to be part of the podium. Simone AGAZZI, faultless since the beginning, had a small mechanical issue on his HONDA and ended up loosing thirty minutes. Therefore, the Italian ends up 10th on the special stage and the Slovakian Martin BENKO is catching up dangerously with a 4th position today, just behind the Norwegian Felix JENSEN, 3rd on the podium with 23’18’’from the leader. The 5th place goes to Philippe CAVELIUS, always still as regular. The French is ahead of his compatriot, Guillaume VIDAL, newcomer of the AFRICA ECO RACE. This pilot of the Chinese Team GXX is seriously progressing, especially in the general ranking as he won three places today.

Who will stop the LAURE/CRESPO team in Auto ?
It’s the question that everybody is asking themselves on the AFRICA ECO RACE 2019. Indeed, the Optimus N°211 was able, for the fourth day in a row, and therefore keep their 1st place overall. Dominique LAURE and Christophe CRESPO win the fourth special stage in a row with 1’27’’ ahead David GERARD and Pascal DELACOUR, their fellow team “Fous du Volant” members who drove a faultless special sector. In third position, Jean Pierre STRUGO and François BORSOTTO, onboard Team MD Rallye Sport official OPTIMUS, who are hanging on and only delayed by 2’14’’. Good day also for Yves FROMONT and Paul VIDAL who, by placing their TAREK in 4th position of the special stage, take on the 3rd place in the general ranking, just in front of Jean-Noël et Rabha JULIEN, penalized by an error of navigation which cost them thirty minutes. A hassle-free stage for Sergey and Aleksandr KUPRIANOV on their OPTIMUS. The Russians get 5th place in the auto category. The bad news of the day is Dominique HOUSIEAUX and Arnaud DEBRON made a roll. The OPTIMUS N°200 committed a mistake on km 380 after pushing hard to remain in first place of the special stage. After 4 rollovers the team will come out of this with a few contusions. If the mechanics are able to put the Optimus back on its wheels, they will be ready to leave again tomorrow as the AFRICA ECO RACE allows them to.

3rd victory for Igor BOUWENS in the truck category.
Days go by and look the same for the IVECO of Igor BOUWENS, Tom DE LEEUW and Ulrich BOERBOOM. The Belgium team succeeds again in the truck category by obtaining a superb 5th place in the auto/truck scratch. Even if this fast stage isn’t the favorite of Tomas TOMECEK’s TATRA, the Czech completes in 8th position today and 2nd in his category. Ahead of Elisabete JACINTO, José MARQUES and Marco COCHINHO’s MAN of just over 15 minutes, the triple winner of the AFRICA ECO RACE takes the lead again in the overall truck ranking in front of the Portuguese MAN and the Belgiums Nöel ESSERS, Marc LAUWERS and Johan COONINX.

Tomorrow, the final stage of this Moroccan week will bring the AFRICA ECO RACE caravan in DAKHLA after a 420 km special stage for the competitors followed by a 214 km liaison. Near to 640 km before a well-deserved rest day boarding the Atlantic Ocean.

Felix JENSEN – KTM – TEAM ULLEVALSETER - Norway: 3rd special stage and 5th overall.
It is a very fast special stage and I must admit that I do not like much this type of terrain. It is also a tough stage for navigation. With Martin BENKO, we helped each other to find the correct tracks and it worked quite well.  For now, all is going well but I am impatiently awaiting the Mauritanian desert.

Simone AGAZZI – HONDA – RS MOTO HONDA RACING TEAM – Italy: 10th special stage and 3rd overall moto.
I fell yesterday and had a hard back. The medical team gave me pain killers that tired me quite a lot so I wasn’t at my usual rhythm. After the petrol checkpoint, I lost some mechanical pieces that I had to go back and get. It must have been my lucky day because I found both pieces. We repaired and left again. I was quite lucky as I could have lost a lot today.

David GERARD – BUGGY OPTIMUS – TEAM NOMINEO AVENTURES MD RALLYE – France: 2nd special stage and 6th overall auto/truck
After yesterday’s bad break where we spent over an hour sorting mechanical problems, we left in 11th position this morning.  We started passing in front of competitors and took it as a game. I must say the fair play of most competitors who uses the Sentinel alerts and kindly let us pass. A beautiful day with a very interesting navigation with my co-pilot who never gets lost, should it be at sea where he lives or in the desert during his holidays with me.

Igor BOUWENS – IVECO – TEAM ART OF SPEED – Belgium: 5th special stage and 13th overall auto/truck.
It was a real pleasure today on a magnificent special stage. I pushed a maximum and had fun with the small buggies. There are yellow ones, blue ones, white, black a bit everywhere. It’s much fun. I just had to stop to take off a piece of tire that was barely hanging, in order not to damage the body. I will continue to go full gaz to get closer to the competition after the three hours I lost the second day.